We welcome you to leave your reviews here on Google reviews.  Thanks.

This is one of several reviews left on Google.

My husband Richard Fox has a custom made pool cue that he accidentally damaged. It's made from Amboyna Burl Exotic wood imported from Indonesia which is the most expensive rare burl wood in the world. It consists of dark reds, oranges, browns and swirls of deep rich striations of color. He was devastated at the damage and thought the only person with the skill required to do a repair of this level would be Dave. He took a short video and sent it to Dave. Dave immediately said he felt certain he could do the repair. Dave did the repair expeditiously. He did an exceptional job. The blend of colors are spot on, Dave's truly an artist and at the top of his trade. To quote my husband: "My cue looks like it did the day it was made, thanks again Dave for a superior job!" Sincerely, Richard Fox - 02/25/2021

Thank-you both for the nice review. I am so pleased I was able to refinish that deep gouge and scratch for you. That high gloss finish really came out nice in the end. Hope you win many games with it. :-) .........Respectfully.........Dave F. 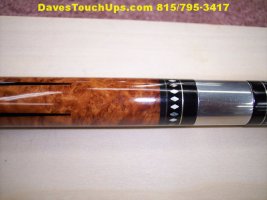 Dave has been doing this for years, we had a dining room set that had many memories for our family but was needing some TLC as the arms on the captain's chairs had broke as well as the other ones loosened over time.  Finish on table was worn down and the sun had faded everything over the past 20 years.

Found Dave on the internet, he had thousands of pictures of his work, his attention to detail was evident.  He was able to quote me with pictures, come and picked up the set, and repaired and refinished it then returned it a week later.

Furniture literally looks new.  5 coats of finish, he made new pieces where needed that looked exactly like new.  I cannot say enough about his work and professionalism. 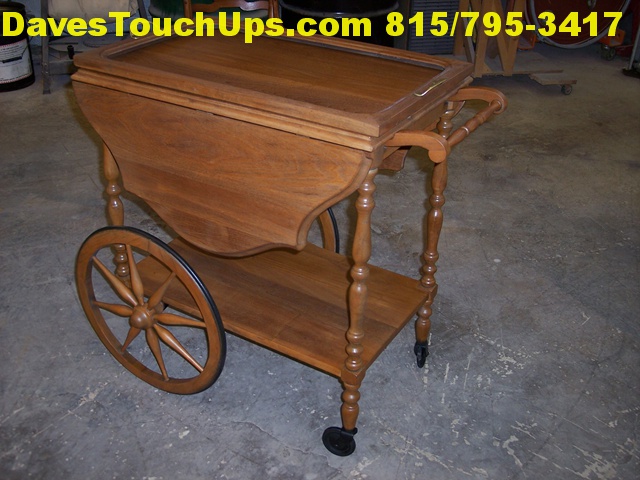 Restoration by Dave on tea cart that belonged to Mary Todd Lincoln.
Has a glass top serving tray.

Recommend this page
Designed and created by Dave's Touch-Ups, Inc.. Thanks for visiting.